This article was originally published by the Native Plant Society of Texas December 20, 2010.  Written by Marilyn Sallee

hristmas Poinsettia is indigenous to Mexico, originating in a rather limited region near present day Taxco; but close cousins north of the border have their own special beauty and vibrancy. In particular, Texas has four native poinsettias that may have a place in your garden.

But first, a little family history. Euphorbias are named after Euphorbus, a 1st century physician and friend of King Juba II of Mauritania (52 BCE – 23 CE). But what makes the family so unusual is that they all have this peculiar flower structure called “cup-flower” or cyathium, and they are the only plants that have this unusual flower shape. Look closely at the cup-flower of any of the poinsettias and you’ll recognize what makes a Euphorbia so different. They also all share another family trait of a thick, milky sap that can be a skin irritant.

The Christmas Poinsettia is only sold for the last six weeks of the year, but tens of millions of them filter through stores and nurseries to make it by far the best selling flowering plant in the United States. It was named for the first United States minister to Mexico, Joel Roberts Poinsett, who brought the plant to the U.S. in 1828, and sent them to President Andrew Jackson for a Christmas display at the White House, making it a Christmas tradition. The scientific name, Euphorbia pulcherrima, translates as “the most beautiful Euphorbia.” The native euphorbia most deserving of cultivation and a place in the flower-bed is a close relative of pulcherrima. The Painted Poinsettia, Euphorbia cyathophora, has bracts that turn an intense day-glo orange-red, and the most amazing fiddle-shaped leaves. This annual re-seeds freely with seed capsules that throw the seeds a great distance when the capsule dries and bursts open.

In the garden, Painted Poinsettia makes a tall background plant of deep green unusual-shaped leaves with the red bracts forming in mid summer. In the flowerbed rich soil can make it lanky and weak, causing it to lay down when wet. Keeping it a background plant gives some support from other plants to hold it upright. And the intense red bracts around the cup-flowers is an eye-catcher – enough to give it another common name of Fire-on-the-mountain. Which leads us to another native poinsettia.

The next of the Texas native poinsettias is actually a pair of plants so closely related they are often mistaken for each other and even interbreed. Even their names are close – Snow-on-the-mountain (Euphorbia marginata) and Snow-on-the-prairie (Euphorbia bicolor). At the end of summer, entire fields suddenly appear to be waist-deep in a lacy white blanket of snow. Both the small cup-flowers and bract edges are white. 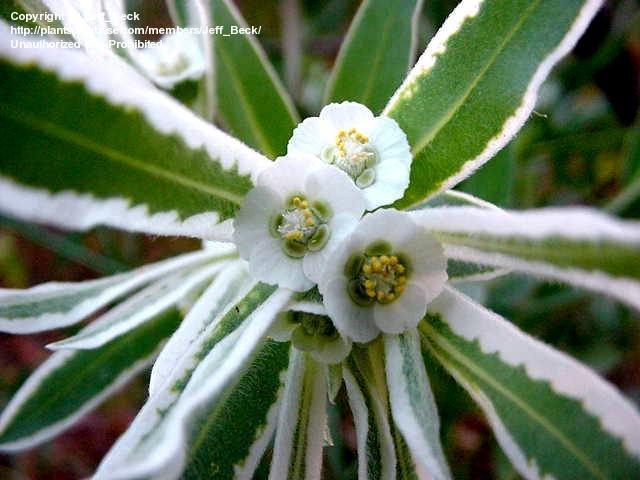 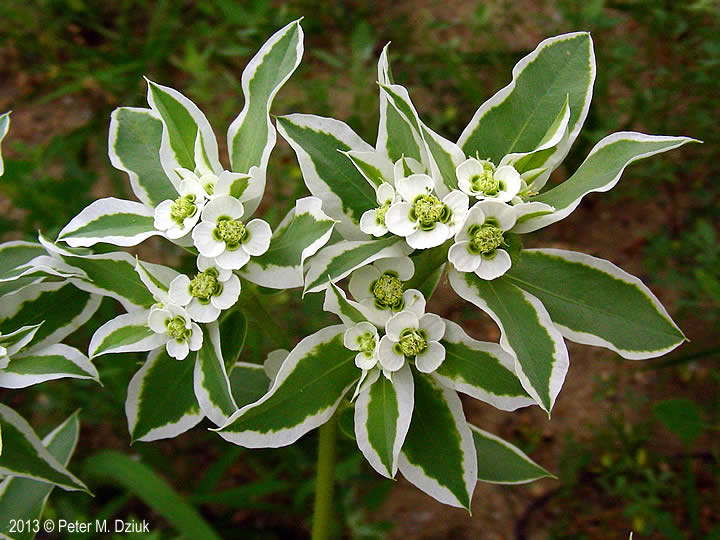 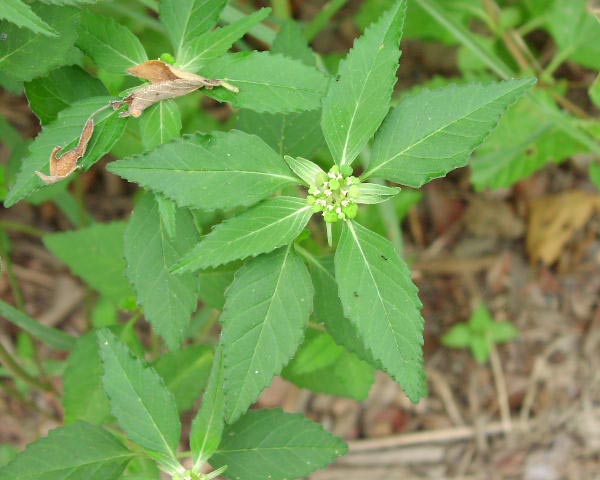 You can tell the “snows” apart by the leaf shape: marginata is broad-leafed and pointed (ovate) while bicolor has a long, narrow leaf with a rounded tip (spatulate). They both have three-lobed seed capsules which fling the seeds when dry in fall. These are annuals whose seeds are worth gathering for a native garden.

Our final Texas native, Euphorbia dentata, is a humble, unassuming little poinsettia. While its cousins can often be waist tall, dentata is usually about a foot tall. Its leaves are simple, lanceolate with toothed edges and well spaced up the stem. And while its cousins are quite showy when in bloom, dentata is subtle – the bracts near the green flower-cluster turn a powdery silver-white, much like the center of the plant has been dusted with powdered sugar, with green seedpods forming cleaved balls clustered in the center.

And Euphorbia dentata can’t help but reveal a family secret in its common name – Toothed Spurge. Yes, all these poinsettias are spurges, usually considered weeds. But what are weeds but under-appreciated native plants. Painted Spurge, Snowy Spurge, Toothed Spurge – all deserve a place in a diverse native garden.

All need full sun to partial shade, in well-drained soil. Keep well watered but allow soil to dry between waterings. The plants are native to poor soils and do not need fertilizer or excessive water; too much water or fertilizer will provide lanky growth and few flowers. Collect seeds after the pods have fully formed, but before they dry and pop open.