Heat the oven to 350 F degrees. Grease a round 8-inch spring form pan.

Blanch the almonds, then using a grinder or a food processor, grind the almonds until fine and set aside.

In a large mixing bowl, beat the eggs and sugar together. Add the butter, flour, baking powder and water and beat with an electric hand mixer.

Stir the almonds into the batter. Grate the lemon and add the zest and stir until thoroughly mixed.

Pour batter into cake pan. Bake in oven on the middle rack at 350 F degrees for approximately 45-50 minutes. Check after 45 minutes. Cake is done if a toothpick inserted into the center of the cake comes out clean.

The traditional way to decorate is to sprinkle powdered sugar on the top, with a cutout of a cross or a shell, to symbolize St. James, on top.

To make a cross, you can use any clean piece of paper folded in fourths to cut out a cross. Then, after the cake has cooled, place the cross in the center of the cake and dust the top with powdered sugar. 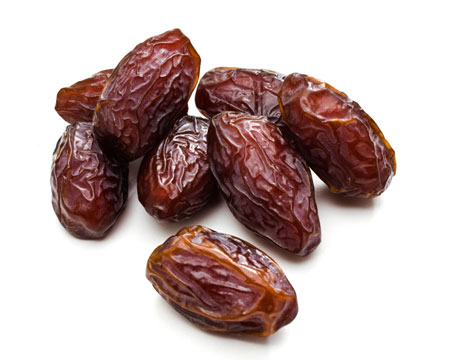 Mix the goat cheese, basil, and chopped nuts in a small bowl. Remove the seeds from the dates, slicing them into 2 stuffable pockets. Stuff the filling inside, and placed on serving plate. Sprinkle with olive oil and a little more basil for garnish. Enjoy! You may have to make 2 batches...

Cream together until fluffy: 1 cup soft shortening (half butter for flavoring) and 2 cups granulated sugar

Stir in alternately with mixture: 1-1/3 cup thin milk (half water) and 2 teaspoons vanilla.

Add 1/3 at a time of each of the “sift” & “stir” to the cream together mixture making sure blended well each time. Now fold in egg whites, using 1/3 of stiff egg whites at a time (some liquefied egg whites ok –just add them in also) until all is incorporated.

Place over boiling water and beat with rotary beater until mixture holds it’s shape. Remove from heat then add in 1-1/2 teaspoon vanilla. Beat until bottom of pan is cool enough to touch then spread on cake. Add flaked sweetened coconut for coconut cake. This would be delicious served with fresh berries in season!

Cream butter and gradually add in sugar till well mixed. Sprinkle in the salt, then sprinkle in flour. Add in the extract. Press dough evenly into a glass 8” pie or square baking dish. Spread the nuts over the top of dough and lightly press the nuts into the dough.

Bake on center oven rack 30-40 minutes until top is a light golden brown. Cool and cut into pie shapes or squares, and dust with powdered sugar.